Re-Volt (リボルト) is a remote-control car racing game developed for a variety of consoles including the Sega Dreamcast in 1999.

The game features a number of remote control cars produced by the Toy-Volt company during the height of their popularity producing toys and games for children. Their latest RC Car line has produced toys with minds of their own and escape to the supermarket, around the neighborhood, over the roofs, and through the museum! Choose from a variety of battery and gas powered RC cars that utilize realistic physics with item power ups similar to the Mario Kart series.

The game includes 28 cars, 14 tracks, one which is exclusive to this version, and a track editor. Up to four players can play together in two different game modes.

The main draw to Re-Volt is the accurate physics model. So long as the wheels are touching a surface, the game will take into account its acceleration, weight, wheel speed and more to recreate the physics of an RC car. Cars will tumble, land on the side or flip over depending on the terrain it drives on. Going top speed through a turn will cause the car to spin out, slowing down before a turn allows the vehicle to take corners with ease. Hills can be the worst enemy of racers if they're not accounted for by driving as straight as possible. Corners can be drifted inside of to avoid loss of speed and time. Keeping the wheels on solid ground allows cars to maintain a top speed, while jumps allows for additional height, but loss of speed.There are buttons dedicated to setting players back on the correct path or flipping their car over.

Tracks will feature slight branches to allow for riskier shortcuts as well as alternate routes for reversed tracks with impassable paths and increase in complexity on the harder difficulties. Routes will be harder to take turns on due to varying heights and riskier paths to take and hazards to avoid such as pools of water.

The game also features two variants of the physics model which changes car collision. This can be changed in the options menu.

The main game also features items that can help or hinder progress in a race that apply offensive and defensive tactics. 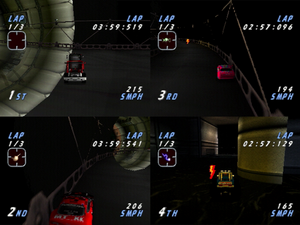 Four players racing against each other in Museum 2.

This game mode is available in multiplayer mode for up to four players to race against each other.

Tracks feature a variety of themes, including a suburban neighborhood, toy world, musem, supermarket, botanical gardens, western ghost towns, and rooftops, exclusive to the Dreamcast version. Completing Time Trial challenges unlock mirrored, reverse and reverse mirrored versions of the tracks, which provide a total of 56 playable tracks. In addition there are four different levels for the Battle Tag game mode as well as a stunt arena. 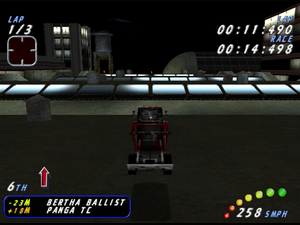 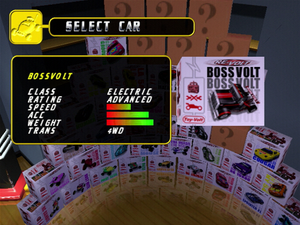 There are over forty cars in the game with varying stats and attributes.

Cars are classified by different stats and ratings. The game starts off with a selection of Rookie rated cars. As the game progresses, access will be granted to Amateur, Advanced, Semi-Pro and Pro cars. Additional cars can be unlocked by winning races and cups.

There are two types of classes for a vehicle:

Cars have the following parameters that affect their performance:

If items are left on in the options menu, racers can make use of ten different items that can turn the race around in or against the favors of the racers. 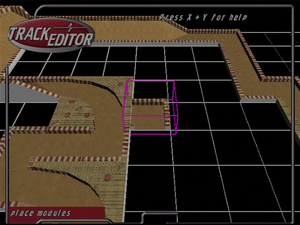 Tracks created in the track editor can be traded with other players by saving exported levels to the VMU. 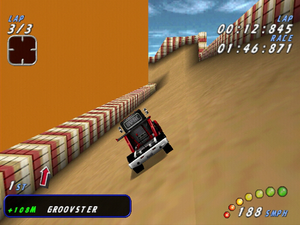 Re-Volt measures the distance of user created tracks and also allows to race in reverse, mirror and reverse mirror variations.

The track editor allows users to create their own tracks with an editor centered around blocks that can be placed in a custom sized grid. Several pieces have different skins to use, variations of slopes and heights to choose from and can be used in Single Race, Multi-Player, Time Trial and Practice game modes. Unlike the Nintendo 64 version, tracks can be traded by VMU and takes up to 7 blocks per level.

Re-Volt can utilize VMU storage to save game progress. It also allows to save user made tracks as well as export them to be found by the game's track select menu for Single and Multiplayer modes. Only exported tracks are playable in-game.