Road Rash 3: Tour De Force is the sequel to Road Rash II, released exclusively for the Sega Mega Drive in 1995.

Road Rash 3 makes several changes over its predecessor. Instead of being set across California (Road Rash) or the whole of the United States (Road Rash II), Road Rash 3 takes place across the world. It also makes use of digitized graphics similar to Mortal Kombat.

The game is a motorcycle racing game taking place in a number of settings around the world, consisting of Australia, Kenya, Japan, Italy, Brazil, Germany, and the United Kingdom. The player can choose from five courses and must finish in fourth place or higher among fourteen other racers. The bike steers with

. Higher-end bikes are equipped with nitrous oxide charges, which can provide a burst of speed if the player quickly taps

The racer can punch neighboring opponents with

. The racer can backhand opponents with

or kick them with

. Some opponents wield weapons such as clubs, chains, nunchaku, crowbars, mace, cattle prods, and oil cans, which can be taken and used by the racer if the opponent is attacked as they are holding the weapon out to strike. The racer can carry multiple weapons at once and cycle through them with

+ START  to select a weapon for use. The mace, cattle prod and oil can are limited to ten charges each.

The racer begins the game with $1,000 and earns cash prizes for each successful race. The player can access a shop from the game's main menu, from which prize winnings can be used to purchase several bikes of differing weights, speeds, and steering capabilities. The player can also upgrade their current bike in four areas: engine performance, chassis endurance, tires and suspension. A bike can only be upgraded once in each area. The player receives a password at the end of a successful race for continuing. The player advances to the next level after winning a race on all five courses. With each subsequent level, the cash prizes become higher, the courses become longer, and the opponents become more aggressive. The player wins the game by winning a race on each course in all five levels.

Race courses are littered with everything from hills to traffic to roadside obstacles that can hurt a competitor or the player, and since the races run in real time, crashing is costly. The racer is ejected from the bike after a crash or if the racer runs out of stamina (shown in the bottom-left corner of the screen) from fights with opponents. In this event, the racer automatically runs back toward the bike, though the player can alter their course and avoid incoming traffic with

or stand still by holding

. Stamina recovers over time. Opponents are likewise ejected from their bikes if their own stamina is depleted (shown in the bottom-right corner of the screen).

The bike has its own "damage meter" between the racer's and opponents' stamina meters, which decreases every time the racer suffers a crash. The bike is wrecked if the meter fully depletes, which ends the player's participation in the current race and deducts the cost of a repair bill from the racer's balance. Motor officers make sporadic appearances throughout the game's tracks, which can also end the player's participation if they apprehend the racer following a crash, also deducting the cost of a fine from their balance. The appearance of a police helicopter signifies the nearby presence of a motor officer, and the helicopter attempts to strike the racer with its landing rails to make them vulnerable to the upcoming officer. If the racer lacks the funds to cover either a repair bill or a fine, they are respectively asked to continue as a repo man for the shop or a snitch for the police. In either case, the racer is given the task of apprehending a wanted opponent by making them crash and pulling over next to them. To aid in this mission, the shop owner provides the racer with a crowbar, while the police provide a club. The wanted opponent stands out from the others by wearing differently colored leathers. Successful apprehension of the wanted opponent results in the racer's repair bill or fine being waived, while failure ends the game.

The game features a two-player mode that can either be played intermittently between players or simultaneously with a split screen. Two players can either race against each other along with other computer-controlled racers (Split Screen) or compete as the only two racers on the track (Mano a Mano). In this mode, the players can select a weapon to wield prior to the start of the race, and no money is won or lost, though officers still appear as an obstacle and can end the race if they apprehend one of the players.

Bikes are divided into three classes, each progressively faster than the last.

The game has five levels, each containing longer and more dangerous versions of the same courses.

During development, the game was known as Road Rash 3: World Warriors.

The game re-released for the PlayStation Portable as part of the compilation EA Replay in 2006, along with the two other Mega Drive Road Rash games. 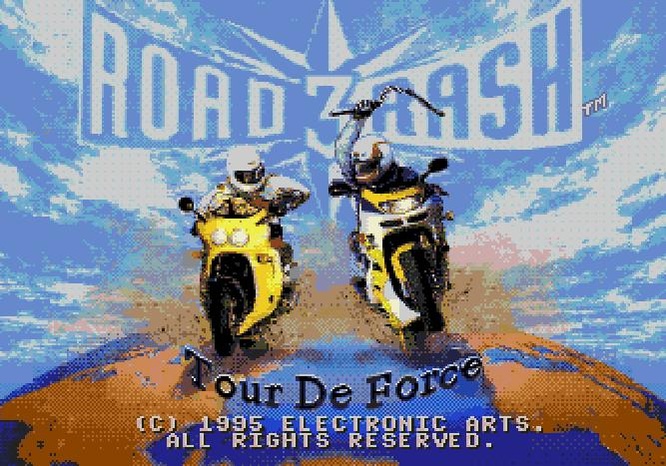