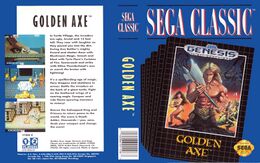 Sega Classic was a budget label given to re-released Sega Mega Drive games in North America. It was originally launched in 1992, although some games in the series were re-released in 1995. Each game was priced at $29.95[1].

The requirements to receive this label are currently unknown, though it is possible it was later replaced with the Mega Hit Series. A promotional leaflet suggests Michael Jackson's Moonwalker was once set for release under this label, however it is thought this re-release did not materialise.