Alisia Dragoon (アリシアドラグーン) is a 1992 platformer for the Sega Mega Drive developed by Game Arts, with Japanese animation studio Gainax (famous for classic franchises such as Nadia: Secret of the Blue Water and Neon Genesis Evangelion) providing art and story, and Mecano Associates providing music.

In the Japanese version, Alisia is the daughter of a sorcerer killed by evil Baldour's followers after her father banished Baldour in a cocoon to outer space, which has since crashed back to Earth, leaving Alisia to defeat Baldour and his followers.

In the Western versions, Alisia is a female adventurer who is the only one who can destroy the evil delivered by a silver star that has returned to Earth (implied that Earth had managed to deal with it once before).

The player controls Alisia Dragoon in side-scrolling platforming environments. She moves with

. Alisia can attack by summoning bolts of lightning from her hands with

. Her lightning attack automatically targets enemies in the direction she is facing and splits itself as necessary. The shot lasts for as long as

is held, but its power diminishes as Alisia drains her attack power. Her power replenishes when she is not attacking; when fully charged, it allows her to unleash a multi-target rolling bolt attack, hitting every enemy on the screen. Alisia is often swarmed with enemies from all sides, and the energy system encourages the player to manage Alisia's power judiciously to have her able to defend herself at critical moments. Alisia can attack while jumping or crouching.

Besides enemies, stages also contain conventional platforming challenges, such as gaps that must be jumped across, environmental hazards such as fireballs launching from the ground, and branching paths. Stages contain numerous hidden areas, often containing level-up items, encouraging exploration. Stages sometimes have scripted sequences or cutscenes. Each stage is completed by defeating the boss at the end.

Helping Alisia in her quest are her pet monsters. These creatures fly around the heroine on their own, attacking her foes, and blocking enemy attacks from hitting her. There are four pets, each with its own type of attack. Only one pet can fight alongside Alisia in her quest, but the player can select any of the four (or none) as the active companion at any time by pressing

(which also pauses the game) and pressing

Over the course of the game, Alisia and her monsters can find items to increase the size of their health bars and level up their attacks. Health bar segments are lost by taking damage from enemy attacks and traps. When Alisia's pets lose their entire health bars, they are removed from play and cannot be brought back until a Revive power-up is collected. If Alisia loses her entire health bar, she can restart the level by expending a continue. The game ends if all the continues have been used. The player does not start with any continues but can find them hidden in the levels. The game has no features for saving the player's progress. After the game ends, a screen is shown, charting the overall performance of the player based on the last stage completed, the number of kills, the power level of Alisia's attack, and the frequency the pet monsters are used.

Dragon companions follow Alisia throughout the game. Alisia's monsters have a health bar and an energy gauge. They are controlled by the computer and attack automatically when the energy bar is full. Each one can be leveled up twice by finding a Level Up item when the companion is selected. Every level increments the companion's health bar by one segment, increases its attack damage, and changes its appearance.

The dragon can become exhausted by depleting its health bar. The appearance of dragon companions changes as they take damage. They can be rejuvenated by finding a Revive item. When revived, companions start over at level 1.

The game was re-released internationally on the Mega Drive Mini in 2019. 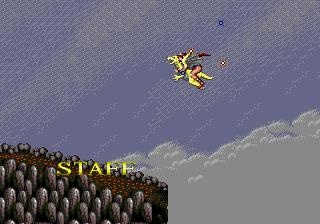 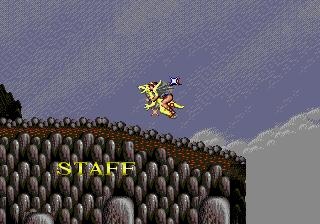