The Mega Drive Mini (メガドライブミニ), sold in North America and Southeast Asia as the Sega Genesis Mini, is a miniature Sega Mega Drive console with 42 built-in games. It was released in September 2019 for most regions, and two weeks later in October 2019 for Europe.

The development codename for the Mega Drive Mini was "Moon", following in the old tradition of Sega consoles being named after planets. Moon was chosen due to a misunderstanding that the Mega Drive's codename was "Earth"[9].

The Mega Drive Mini follows in the footsteps of other hardware manufacturers; Nintendo with its NES and Super NES Classic Edition units, Sony with its PlayStation Classic and SNK with its Neo Geo X Gold and Neo Geo Mini systems. The unit is designed to resemble the original model of Sega Mega Drive (or Sega Genesis) at 55%[10] the size of the original, but is incompatible with any of the original games or controllers, relying solely on its built-in library of emulated games and slots for two USB peripherals. Video is output at 720p 60Hz via HDMI.

Prior to the console's release, other "mini Mega Drives" were available, such as the Sega Mega Drive Flashback by AtGames and a similar cost-reduced system by Tectoy, however while both are officially licensed by Sega, the Mega Drive Mini is the only one of the three to be developed by the company (although the actual software emulation was handled by M2). It was therefore marketed as being the more "official" product.

Also, unlike these older systems, Sega acquired the rights to feature games by a variety of third-party publishers in the Mega Drive Mini, including the likes of Konami, Namco, Capcom, Interplay, Electronic Arts and Taito.

In Japan, two packages were released - a standard edition with one USB Six Button Control Pad, and a "W" edition with two. In Western territories, the Mega Drive Mini only ships with three button control pads. Malaysia and the Philippines got both the US Genesis version and the Asian Mega Drive "W" version. 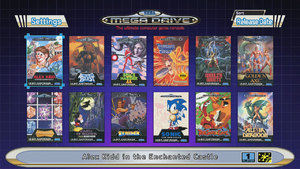 The menu interface from the European system.

The Mega Drive Mini presents the player with a graphical interface displaying the covers of every game included on the system. Twelve covers are displayed on the screen at a time, but the player can choose to display all games at once by pressing

, displaying their spines. The games can even be sorted alphabetically, by release date, by genre, or the number of supported players. The menu music is composed by Yuzo Koshiro of Streets of Rage fame.

Changing the system language in the settings menu will do more than just change the menu language; it will also change the menu interface to match the selected language, changing to a Japanese Mega Drive-themed menu for Japanese, Chinese and Korean, a Genesis-themed menu for English (with the exception of European/Australian systems), and a PAL Mega Drive-themed menu for French, Italian, German and Spanish. Most of the covers will also change to match those of the respective region, and alternate regional versions of the games can be played. Most intriguingly, changing the language of a Western system to Japanese will change Dr. Robotnik's Mean Bean Machine into Puyo Puyo. All games run at 60Hz regardless of system region, including the European versions of certain games such as Castlevania: Bloodlines and Landstalker which have been fully optimised to run at NTSC speeds. Not all games have an alternate regional variant available and will remain the same. The Japanese Mini's version The Revenge of Shinobi uses the Virtual Console revision of the game.

During a game, the player can call up System Menu at any time by pressing  START  and

together on a Six Button Control Pad, holding the  START  button down for a few seconds or by pressing the RESET button on the console. From this menu, the player can save their progress to a savestate, with each game supporting up to four savestates. Savestates will also remember which region the game is set to, so if the system language is changed, and the savestate is loaded, the regional variant of the game that was played when the savestate was created will be loaded.

The settings menu gives the player the ability to alter the display in various ways. Games can be displayed in a 4:3 aspect ratio or they can fill the entire screen, along with an optional CRT filter that blurs the image and displays scanlines. When playing in a 4:3 ratio, the player can choose to have one of two wallpapers displayed around the game screen to fill the blank space. The menu also includes a QR code that takes the player to a site hosting the original game manuals when scanned using a smartphone or tablet.

While all editions of the Mega Drive Mini contain 42 games, the lineup has been adjusted to better suit the region. All regions contain English, Japanese, French, German, Spanish, Italian, Chinese and Korean menus which affect the language the game is in. Some inaccessible games might also be present on versions of the console, such as Disney's Aladdin and Mortal Kombat II on the European version[11] of the console.