Slap Fight MD (スラップファイト) is a Sega Mega Drive vertical shoot-'em-up game developed by MNM Software and published by Tengen. Released in Japan in June 1993, the game is an enhanced port of the 1986 Toaplan arcade game Slap Fight. 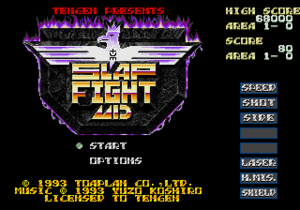 fires a single shot. In either case, the shots will not reach the end of the screen, so proper positioning is necessary. On the side of the screen is a menu of powerups. Some enemies leave stars that, when collected, moves a cursor to an item on that menu; press

to use the powerup. If the player loses a life before using a powerup, the cursor is moved to the "speed up" powerup.

The late and limited release of Slap Fight MD meant that reportedly only about 5,000 copies were sold in total.

Slap Fight MD was later re-released as one of the 42 pre-installed games on the Mega Drive Mini in Japan and other Asian countries. However, the game was modified in several ways. All mentions of Tengen were removed from the game and it's packaging, with further modifications made for the game's manual released through the system's official website. In addition, an in-game sprite resembling one of the Invaders from Space Invaders was modified likely due to copyright concerns.