Castlevania: Bloodlines, known in Japan as Vampire Killer (バンパイアキラー) and in Europe as Castlevania: The New Generation, is a Sega Mega Drive action platform game developed and published by Konami. First released in the United States in December 1993, it is the first title in the company's popular Castlevania series to be developed for a Sega system.

The game is a moderate departure from previous entries in the series, as gameplay is generally much faster and more dynamic, and for the first time, does not feature a member of the Belmont clan as a playable character (instead connecting the protagonists to those of the original 1897 Bram Stoker horror novel Dracula, and taking place exclusively in Romania.)

In 1897, Quincy Morris defeated Count Dracula, but died afterwards due to the wounds from the battle. His son, John Morris, and his friend Eric Lecarde witnessed it.

Twenty years later, a vampire named Elizabeth Bartley - who had been executed in 1421 - was accidentally brought back to life by a witch named Drolta Tzuentes. Once back, Elizabeth wants to revive her dead uncle - none other than Dracula.

Now, it's up to John and Eric - descendants of a clan of vampire hunters, the Belmonts - to find Elizabeth and stop her, before she brings Count Dracula back to the land of the living.

In Castlevania: Bloodlines, the player travels through six different countries of Europe, controlling either John Morris — current owner of the "Vampire Killer" whip — or his childhood friend Eric Lecarde — a master lanceman. Macabre creatures such as zombies and skeletons are summoned by Countess Bartley to kill you.

Along the way the player can collect items to power-up their character's weapon (up to three times), as well as one of three special weapons, useful to hit enemies from afar. In order to use the special weapons, the player must collect jewels, which are hidden inside candles found all over the way.

uses the special weapon; controls can be changed at the options menu. Special weapons normally require one jewel per usage, though holding

turns it into a smart bomb, which uses up four jewels. Also, if you collect three power-ups having at least eight jewels, the special weapon is temporarily replaced by an ultimate attack that costs eight jewels. Holding

midair performs a straight down attack.

Passwords are given at the end of each stage, once the stage boss is defeated. When passwords are used, the weapon level, jewels count and score are reset — the special weapon is also lost.

Castlevania: Bloodlines was the subject of much debate at the time, as even though it features considerable amounts of blood and violence, the Videogame Rating Council awarded the game a "GA" (the lowest rating possible.) This later affected the European release, which was heavily censored and renamed Castlevania: The New Generation as a result. Interestingly, the Australian release retains the European name, but remains identical to the American release in content.

Like most Konami games on the Sega Mega Drive, Bloodlines has become a highly desirable game and as a consequence is rather expensive. For many years, the game had never seen a rerelease on another system, which didn't help the game's rarity. In 2019, the game finally saw two re-releases - as part of the Castlevania Anniversary Collection on PlayStation 4, Nintendo Switch, Xbox One and Steam, and as one of the 42 games pre-installed on the Mega Drive Mini. The Mega Drive Mini re-release includes all regional versions of the game accessible by changing the system language accordingly.

The game utilizes a region lockout mechanism, but it can be disabled by holding down the

button during startup. Note that this doesn't affect the title screen and graphics modifications (so it's not possible to turn a censored PAL version into an uncensored NTSC-J or NTSC-U version). The PAL version included on all variants of the Mega Drive Mini disables all region lockout by default.

The only regional difference in the ending credits is in the very first line, where it says "<regional game title> Staff". Also, if you beat the game in normal difficulty it ends with "Try Expert Mode!"; if you finish it in expert difficulty it changes to "Congratulations! You are the master of Vampire Killer". 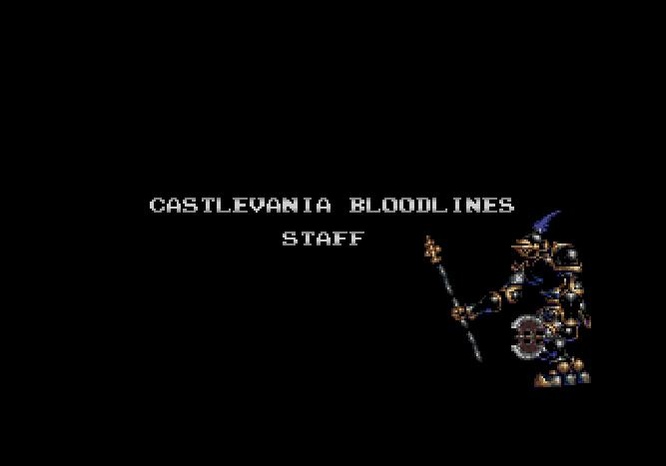