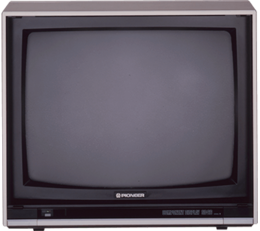 Pioneer's SEED Television was an ambitious and novel idea, but one that came at a high cost to consumers.

The Pioneer System Component TV 'SEED' (パイオニア システム コンポーネント テレビ 「シード」), known in the United States as the Pioneer SD-25 Expandable TV[3], and commonly known as the SEED Television, is a hardware-expandable television set developed and manufactured by Pioneer. An acronym for "system expandable"[4], it was first released in Japan in 1983, and later brought to the United States the same year. The device offers a novel expansion system: the bottom of the television set features an expansion bay in which users can insert separate hardware modules to enable different functionalities[5], like stereo television, karaoke, and even video games. While not an unheard-of idea in home electronics, this method of interchangeable hardware expansions is not normally integrated into the television set itself. By extension, the SD-G5 was among one of the first (and likely the very first) of these expansions to enable the device to interface with video games.

As Japan was growing wealthier from the Japanese asset price bubble, so was the average Japanese consumer. With this newfound wealth came a push from the nation's electronics manufacturers in both pioneering technology and lower prices, and soon, the Japanese market for home electronics exploded, both home and abroad. One of these companies, Pioneer, began an internal project seeking to redefine consumer home television as "a unique proposal beyond the framework of television and display."[5]

While innovative, the SD-G5's modern status as an obscure rarity indicates a lukewarm reception, and its high pricing would have significantly limited interest among the average Japanese buyer. Still, it enjoys a reputation as one of the forerunners of expandable home technology, particularly in the field of video games.

The SEED Television and its interchangeable CompoPacks are the direct predecessor to Pioneer's LaserActive platform, which also features exchangeable hardware expansions (now known as PACs), similar internal coding schemes, and was also released exclusively in Japan and the United States.