Psycho Fox is a Sega Master System game developed by VIC Tokai and published by Sega in 1989. It is a platform game starring Psycho Fox, who must rid the land of an evil god named Madfox Daimyōjin. "Psycho" is meant to mean "psychic," similar to its use in Psychic World. Due to a typo, some European cartridges are labeled as "Psyco Fox."

Psycho Fox is second in a line of similar platformers by VIC Tokai, succeeding the 1988 Famicom release of Kakefu Kimi no Jump Tengoku: Speed Jigoku (released in the West in 1990 as Kid Kool and the Quest for the Seven Wonder Herbs), and predeceding the 1990 Sega Mega Drive game, Magical Hat no Buttobi Turbo! Daibouken (which was extensively reworked to become Decap Attack when released in the West).

In Brazil, the game was re-released in 1995 with graphical changes as Sapo Xulé Vs Os Invasores do Brejo. 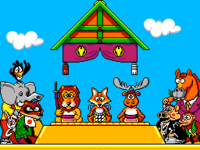 Among a group of fox priests who worship the Inari Daimyojin (Fox Deity), an evil fox named Madfox Daimyōjin has infiltrated his way to the highest ranks and taken over the shrine. After seizing power, Madfox corrupted the land and created hordes of creatures. One young fox has been chosen by his people to rid the land of this evil deity. 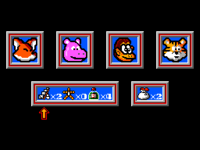 Psycho Fox is a side-scrolling platform game. The player takes control of Psycho Fox, a fox with the ability to transform himself into other animals. Psycho Fox can be moved around with

. He can punch enemies at short range with

. He can punch enemies while moving or in midair but not while crouching. He can also defeat enemies by jumping on them; the first hit stomps the enemy into the ground, but the enemy can recover from this momentarily if not jumped on again. Some enemies must be jumped on several times to be defeated.

The physics of the game have much heavier inertia than most other platformers. Psycho Fox's jump covers very little horizontal distance unless he first builds momentum by running, for instance. Momentum can also affect stopping distance. Acceleration is relatively slow from a complete stop but less onerous from a partial stop. Psycho Fox can skip across water if he is running.

The goal is to make it to the "Round End" sign at the end of each level. The screen does not scroll backward, so the player cannot backtrack, but it does scroll downward after traveling up. Levels are designed with ground paths as well as higher routes on aerial platforms.

Psycho Fox uses a Shinto stick to change into other animals, each of which has its own special ability. He must find a Psycho Stick item to transform; each transformation consumes a stick. There are also other items that Psycho Fox can find to help him on his journey. The  PAUSE  button brings up a menu that allows the player to choose an item to use. Psycho Fox also has an ally named Bird Fly, who perches on his back like a backpack. Bird Fly can be thrown at enemies with

, replacing the punch attack (though Psycho Fox can still punch by hitting

again while Bird Fly is deployed). He returns to Psycho Fox like a boomerang after being thrown. Bird Fly can hit multiple enemies when thrown, both on his way out and his way back. Bird Fly leaves for boss fights but returns afterwards.

Psycho Fox loses a life if he takes any damage from enemies or hazards, including falling into water traps. If Psycho Fox is hit while carrying Bird Fly, Bird Fly goes away and the player does not lose a life. The player starts with three lives and can obtain more through eggs and through bonus games. If the player runs out of lives, the game ends, but the player can continue it from the beginning of the current round from the title screen. The player can continue as many times as desired but loses all items in doing so.

Items are contained in eggs or sometimes dropped by defeated enemies. Punch an egg to break it open. Sometimes eggs contain no item or an enemy.

The Psycho Stick, Straw Effigy, and Magic Medicine items are collected in an inventory and not used immediately. The Money Bag item is collected and saved for bonus games. The player can hold a maximum of nine of each item. The  PAUSE  button opens a menu for selecting and using items.

Stages consist of three rounds followed by a fight against a Boss Monster.

At the end of each round, there is a lottery minigame similar to amidakuji. The player can place multiple Psycho Foxes on five pathways. The number of Psycho Foxes given corresponds to the number of Money Bags found in the round. Multiple Psycho Foxes can be placed on the same pathway. Once they have all been placed, they walk up the path to the end, crossing whenever there is a juncture. The end can contain item prizes or a hole that Psycho Fox falls into for no prize.

If Psycho Fox arrives at a shrine at the end of the path, the numbers on the shrine spin around like a slot machine. The player can press

to stop the numbers. The player is then rewarded extra lives corresponding to the number that the shrine stopped on. If multiple foxes land on the shrine, the number is multiplied by the number of foxes (rather than rolling multiple times). 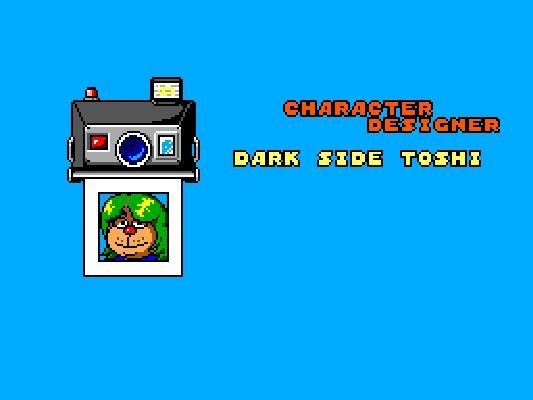