Sega World or SegaWorld is a common name given to amusement centers created by Sega.

Internationally, Sega has established many venues under the name, a significant majority of which were game centers/amusement arcades in Japan during the 1990s at the peak of their success as a home console manufacturer. At the time, the company's aspirations were to become one of the largest entertainment companies on the planet to rival the likes of Disney,[1] and Sega Worlds, opening in their hundreds over the course of the decade, were seen as a key component in providing the groundwork for doing so.

In the respect of providing infrastructure for larger business endeavours, the Sega World venues can be considered to have been successful, with Sega creating the Amusement Theme Park concept and indoor theme parks off the back of them. However, many Sega Worlds have since closed permanently as a result of restructuring or poor performance, with some also receiving rebrands to use different naming schemes created by Sega. A number continue to operate in Japan, where the name originated and was used as far back as February 1989 for Sega World Ito Yokado Obihiro.[2] 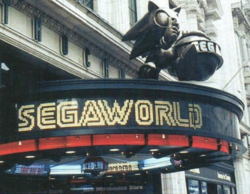 SegaWorld London was Sega's largest facility to have operated.

Though their specific definitions have differed between regions, Sega Worlds typically house coin-operated arcade machines, thusly making them amusement arcades in the eyes of most. A large majority have been targeted towards families, often containing bright, colourful décor with frequent usage of Sonic The Hedgehog mascot characters.

Some, including the former Sega World Hakkeijima Carnival House, operated Mid-size attractions, and two particularly well-known venues using the name, SegaWorld London and Sega World Sydney, were essentially indoor theme parks and overseas versions of the Joypolis scheme, featuring Large attractions and other facilities. Specific elements of them have also been adapted for use in other initiatives, such as the separate GameWorks centers in America.

They have been developed in a variety of settings, with the most frequent examples depending on the country - in the United Kingdom, Sega Worlds were usually tenants of a larger complex, whilst in Japan many are new buildings commissioned by Sega in suburban areas. Some have also been opened within bowling alleys, shopping centers, department stores, and theme parks, like Sega World Festival Gate and Sega World Rinkuu.

Sega World, if considered to be a single global chain, has not been dependant on one central company for its running, rather several separate regional divisions created by Sega. The remaining venues in Japan are currently managed by the former Sega Entertainment, while Sega World Oe in Taiwan, the first overseas region to receive the Sega World name during early 1992, is managed by the former Sega Amusement Taiwan.[3] These divisions have often been created specifically for their operations, particularly if Sega has not previously traded in the county, and have also been sold under licence to other companies, for example Leisure Exchange.

This inflatable "Sega World" was also used across the United Kingdom for events. It houses about five large arcade cabinets.[4]