The Great Circus Mystery Starring Mickey & Minnie, known as Mickey to Minnie Magical Adventure 2 (ミッキーとミニー マジカルアドベンチャー２) in Japan, is a 1994 platform game developed and published Capcom for the Sega Mega Drive and Super NES. It is the second in their Disney's Magical Quest series, following the 1992 SNES game The Magical Quest Starring Mickey Mouse.

No PAL version of the game was released, however it was scheduled for Australia in April 1995[3].

The game is a platformer that can be played as Mickey or Minnie or as both in a cooperative game. A second player can join at any point during the game by pressing the  START  button. Mickey and Minnie are moved with

. They can stun enemies and attack bosses by jumping on top of them. They enter doors with

. Over the course of the game, they collect special suits that give them new capabilities. The player can select the suit by pressing

, which cycles an icon in the top-left corner of the screen, and then press

(or  START  with a three button control pad) to change to the selected suit.

Mickey and Minnie can collect coins by finding them hidden behind blocks or by vacuuming enemies with the Sweeper Outfit. Coins can be spent on items in the General Store. Entrances to the store are hidden throughout the stages.

Each character's life is represented by hearts in the top-left corner of the screen. They lose a heart each time they are hit by an enemy or a hazard. There are Big Hearts hidden throughout the game and purchasable in some of the stores that permanently extend the character's life by one heart. When a character loses all of their hearts, the player loses a chance. As long as the player has chances remaining, Mickey or Minnie is revived after a moment without restarting the stage. In a single-player game when the player runs out of chances or in two-player games when both players run out of chances, the game ends, but it can be continued any number of times from the beginning of the stage segment. In two-player games when one player runs out of chances, that player cannot be revived until the other player completes the current stage segment.

Each stage has two segments, and each segment concludes with a boss fight. 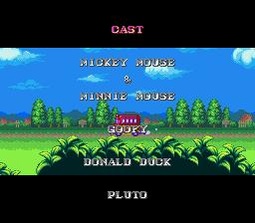