The Misadventures of Flink, or simply Flink is a Sega Mega Drive and Sega Mega-CD platform game. A working title for this game was Troll[7].

There was a North American Mega Drive version planned, but it was scrapped.

The evil wizard Wicked Wainwright has captured the four leaders of peaceful Imagica Island. He has transported their spirits into four hidden crystals and scattered them throughout the island.

The apprentice wizard Flink embarks on a quest to find the four crystals, which he can use to open the gateway to Wicked Wainwright's lair and save the island from him.

The game is a side-scrolling platformer similar to the likes of Super Mario Bros. 3. The player controls the wizard Flink. Stages are selected from a map screen. At the end of each world is a boss, which Flink must defeat to rescue one of the island leaders, who usually rewards Flink with a spell. Stages can be revisited after they have been completed to collect items or access previously inaccessible areas with new abilities, and this is necessary in some parts of the game to proceed.

; he jumps higher when the button is held longer. He swims with

. He can slide down steep slopes with

. He can pick up items with

and throw them with

again. Some items must be picked up from a kneeling position with

. Enemies are defeated by jumping on their heads, by sliding down slopes, or by throwing items at them. Many enemies are only stunned after being jumped on; Flink can jump on them again to defeat them or pick them up and throw them. He can grab ropes and vines with

when jumping in front of them and climb them with

. He can enter doorways with

Flink gathers ingredients by exploring the stages. He acquires Spell Scrolls by finding them in stages or by rescuing leaders. These scrolls describe the spell and present a recipe for creating them. Spells require three ingredients in a particular order; the recipe typically provides the ingredients but only the position of one of them, so the player must experiment to learn the correct order for the other two. If Flink gets the recipe wrong, the concoction blows up in Flink's face and the ingredients are wasted. The player can read the spell scrolls, select a spell, or create a spell through the pause menu with  START . Spells only need to be created once and then can be selected at any time.

After selecting a spell, Flink can cast it with

. Casting spells costs magic energy, which is indicated by a bottle in the corner of the screen; if Flink does not have enough magic energy to cast the spell, the bottle flashes. Flink can acquire more magic energy by collecting it from enemies after they are defeated or finding magic potions.

Flink acquires new spells by finding Spell Scrolls and mixing ingredients to create the spell. He can then cast the spell with

Developers Erwin Kloibhofer and Henk Nieborg created a spritual successor, The Adventures of Lomax, for the Sony PlayStation and Windows PCs in 1996. The game is a spin-off of the Lemmings series and resembles Flink in gameplay and art style. 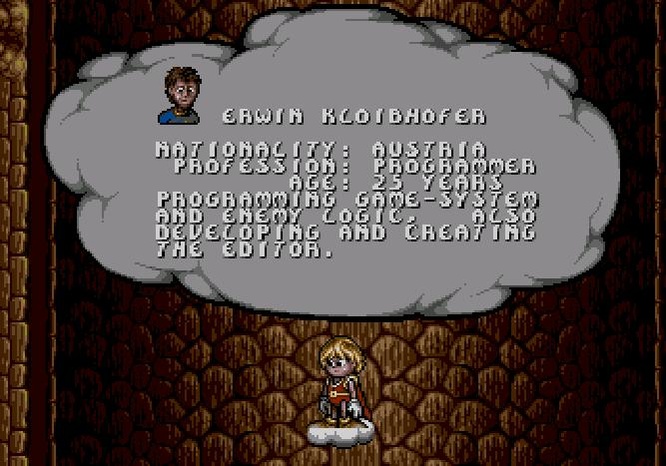