The mysterious Life Foundation has captured Venom and removed five symbiote spawn from him. Venom manages to escape their clutches and seeks to again forge an uneasy alliance with his rival Spider-Man in order to stop the symbiote threat.

The game is a belt-scrolling beat-'em-up that plays mostly identically to its predecessor but with the addition of simultaneous two-player gameplay. The player can choose to play as either Spider-Man or Venom. A second player can join (as the other character) at any point during gameplay by pressing  START . The characters control identically, but Spider-Man is faster while Venom is stronger. The characters walk with

. They move in and out of the plane with

. The characters can grab walls in the background with

, which can then be climbed using the D-Pad.

The characters attack by punching and kicking with

. Pressing the button repeatedly performs a combo. The characters can perform a jumping kick by pressing

while jumping. They can shoulder ram enemies by pressing

while running. Pressing back and

performs a back-flip attack, attacking the enemy in front of the character. They can perform a desperation attack with

, which attacks in all directions, useful when surrounded, but also costing a small amount of health. If the player performs a series of accurate attacks, the character's health bar starts to blink. Hitting or grabbing and attacking an enemy while the health bar is flashing launches a "Power Hit," causing immense damage.

The characters automatically grab enemies when they walk into them. While grabbing, they can perform a combo attack by repeatedly pressing

. While doing the grab combo, pressing the opposite direction that the character is facing throws the enemy behind him. The characters can lift the enemy above their heads with

The characters can fire a web shot with

. This holds the enemy in place for a few seconds, though only one enemy can be stunned this way at a time. The characters can create a web shield by holding

that protects the player while standing still. They can fire a web line with

that pulls enemies towards them to grab them from distance. If there are two enemies on each side of the character, firing a web line pulls both enemies and damages them with a Double Smash. The characters can shoot a web line into the air for swinging with

with a Six Button Control Pad), which can be used to cross over gaps.

Spider-Man and Venom are assisted on their journey by their superhero allies. They gain the ability to summon an ally by finding that ally's special icon in the stages. The player can select which ally to use by tapping  START  (or

) to cycle through them. They can be called into battle with

The characters have health bars that empty as they take damage from foes. They are defeated when they run out of health but revive if the player has extra lives remaining. The game ends if the player runs out of lives. There are no continues, but there is a password system for continuing. 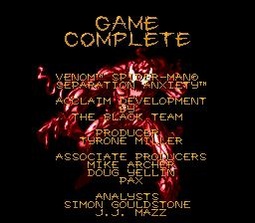