For other games with the same name, see Bram Stoker's Dracula.

Bram Stoker's Dracula is a Sega Mega Drive action platform game developed by Traveller's Tales and published by Sony Imagesoft. Based on the 1992 horror film Bram Stoker's Dracula, it was first released in Europe and the United States in mid to late 1993, and was also brought to Australia some time later.

Dracula has cast a curse on Mina Murray. Jonathan Harker must journey to Castle Dracula and drive a stake through the heart of its vampire lord to save her from an eternal fate as a vampiress.

The game is an action platformer reminiscent of Castlevania or Master of Darkness. The player controls Jonathan Harker, who fights a variety of horror-themed enemies such as spiders, bats, and skeletons. An arrow at the top of the screen guides Harker to the end of the level. The "dusk" part of the level is indoors and involves finding Van Helsing, who tells the player (through a speech bubble) which of the five weapons is best for defeating the boss. The weapons appear throughout the level after talking to Van Helsing, along with an exit door (with the arrow now pointing toward the exit). The "night" part of the level usually takes place outdoors and ends with a boss fight. There are five ranged weapons in the game, and each boss is especially vulnerable to a different one. When near a boss, the arrow changes to a beaker showing the health of the boss. Bosses include Dracula in various forms.

and jumps down from platforms with

. Harker can often jump on background objects in order to reach higher platforms. He picks up items with

. Harker carries a sword, which he can swipe with

. He can acquire items that give him a ranged attack, which is used with

. Ranged attacks have limited ammunition. Enemies continually respawn. Attacks can be done while jumping or crouching. Sometimes attacking objects allows Harker to manipulate his environment, such as dropping a weight, flipping a switch, or lighting a torch, which is often necessary to progress. He enters the level exit by standing in front of it and pressing

Harker's health is depicted by beakers in the corner of the screen. He loses a beaker each time he takes damage, but they can be restored by picking up healing potions. He loses a life if he runs out of health. The game ends if the player runs out of lives but can be continued if the player has continues remaining. The player can choose the starting number of lives and the maximum number of health beakers before starting the game. The player can also choose from three difficulty levels (Trainer, Normal, and Hard). The Trainer difficulty only plays through part of the game. The Normal and Hard difficulties play through the entire game, with the Hard difficulty starting Harker with a short-ranged dagger rather than a sword and restricting him to a maximum of three health beakers.

This version of the game was also released for the Super NES.

From the Film: Bram Stoker's DRACULA 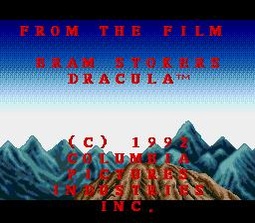