Zaxxon (ザクソン) is an arcade shoot 'em up video game released by Sega. It is named after its groundbreaking use of axonometric projection (though more specifically, it uses isometric projection) and was released for bespoke arcade hardware in 1982.

Zaxxon was the first video game to use an isometric perspective, a graphical style which would see widespread use in the years which followed. It was an early attempt at adding three-dimensional depth to the shoot 'em up genre.

In Zaxxon, the player controls a starship which continuously moves towards the top right of the screen - a "diagonal" sidescroller, as opposed to the horizontal or vertical shooters more commonly seen. The basic idea is to shoot at and destroy enemies within a space fortress to rank up points, while avoiding obstacles and enemy fire.

What made Zaxxon unique at the time was the ability for the player to adjust the ship's height as well as move the craft left and right, essentially creating one of the first three-dimensional shooters (though the player can still only move in two dimensions, as he/she cannot stop the ship from moving forward). With this comes the task of navigating scenery - Zaxxon has levels which take part in space stations, and the player must duck and dive to avoid crashing into objects. Furthermore missiles can be launched upwards from the ground (similar to Scramble by Konami), and the player must obtain fuel to stay airbourne. 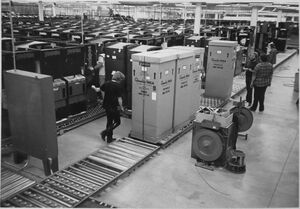 Zaxxon was the first arcade game to be advertised on US television. A commercial was produced with help from Sega's then-owners Paramount Pictures for $150,000[16], and aired on local television stations in Los Angeles (which aired it first), Chicago, New York, New Jersey and Pennsylvania between July 12 (11 in Chicago) through to July 25, 1982[17].

David Rosen is claimed to have been the brainchild behind the project, having teamed up with Jerry Kramer Associates to produce the commercial[18]. They, in turn, contracted Mathematical Applications Group Inc. (MAGI; best known for the special effects in the movie Tron) to produce what was then cutting edge 3D graphics[18].

The full budget for the television campaign (including acquiring the airtime) was estimated to be between $500,000 and $1 million[18]. In Los Angeles, the commercial aired during syndicated repeats of Saturday Night Live, Kung Fu, MASH, The Jeffersons, American Bandstand, Fridays and SCTV[18]. It ws also broadcast 15 times during a KTLA all-day Star Trek marathon (Star Trek being another Paramount property)[18].

The commercial was successful, and was said to not only double trade in some venues, but encourage new customers to visit the arcades specifically for the game[17]. Rivals such as Williams Electronics, Stern Electronics and Taito also praised the advert for attracting potential arcade customers[18].

Zaxxon stands as one of Sega's first big successes in the arcade video game market, and was subsequently brought to a plethora of home systems during the early 1980s, being one of the most widely ported Sega games in history. The hardware behind the game also went in to fuel other isometric arcade games, such as Congo Bongo and Future Spy.

The Atari 2600 and Intellivision versions of the game (published by Coleco) are the most radically different, opting for a third-person "behind the ship" view rather than an isometric one, presumably due to hardware limitations. It has been suggested, however, that Coleco purposely dumbed down these versions for competition purposes - their ColecoVision port was for many years the most accurate home copy of the game, however skipped a few levels due to cartridge restrictions (something later fixed with Zaxxon Super Game for Coleco's Adam computer).

An Atari 5200 version similar to the Atari computers copy was also released.

Sega produced their own home port of the game for Japanese SG-1000s in 1985, however held back from bringing the game to more modern Sega platforms. Zaxxon was not seen again until a surprise appearance in the Sega Mega Drive Collection and Sega Mega Drive Ultimate Collection compilations, and in more recent times, the arcade version has been made available through the Wii's Virtual Console service.

As one of Sega's first success stories, Zaxxon was also turned into a board game by Milton Bradley in 1982. Bandai and Coleco also released VFD and LCD versions of the game, in the form of a tabletop Zaxxon, FL Zaxxon and a handheld Zaxxon. Curiously, Sega of America, through its blog, has erroneously laid claim to several other versions of Zaxxon - a homebrew Commodore Amiga version from 1995, and a version for the Dragon 32/64 computer (based on the TRS-80 CoCo version), whose legitimacy has yet to be verified.

Zaxxon was followed in the arcades by Super Zaxxon, which despite offering similar gameplay, was far less successful. Also created was Zaxxon 3D for the Sega Master System and Zaxxon's Motherbase 2000 for the Sega 32X.