Edge 16 is an unreleased Sega Mega Drive modem created as a joint venture between PF Magic and AT&T. 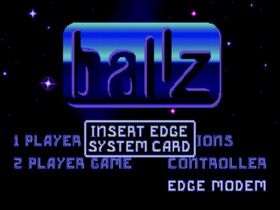 The Edge 16 was a device to be inserted into the cartridge slot of a Mega Drive console, allowing two players to compete with Mega Drive games through the internet - control pad signals would be sent through the phone line, as would sounds from a microphone to allow players to communicate. A card slot at the front of the device would have been used to save game data to memory cards.[1] A keyboard attachment was also shown, though few details are known about it.

While very few games were specifically announced to support the Edge 16, two titles were confirmed to have planned support for the modem: PF Magic's own Ballz 3D: The Battle of the Balls, and GameTek's Brutal: Paws of Fury.[2] Notably, in the case of the former, the game still retains code for the Edge 16, and would presumably work as intended when provided the corresponding hardware.

Announced in July 1993 at Summer CES 1993, the Edge 16 was initially scheduled for a summer 1994 launch in the United States, with software support from developers Electronic Arts, Tengen, GameTek and Microprose.[3] It made its first appearance in January 1994 at Winter CES 1994, where attendees could play matches of Ballz 3D across the booth via two Edge 16 units. While appearing promising in the gaming press, this would be the system's one and only appearance.

Reportedly, the Edge 16 was fully completed and ready to ship by September 1994, but AT&T changed its mind about entering the video game industry in the autumn of 1994[4], and the hardware was ultimately left unreleased. A limited lifespan as the industry moved to 32-bit and 64-bit consoles was also cited as a reason for its cancellation[4].