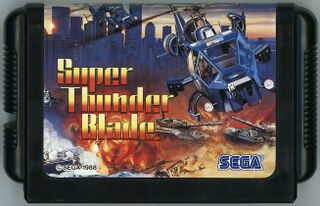 Mega Drive cartridges are the primary storage medium for the Sega Mega Drive.

The Mega Drive runs games housed in plastic cartridges uniquely shaped to fit the system. Though the technology exists within the console to run Sega Master System games, the Power Base Converter is required to convert between the differing pin connections and slot sizes.

Official Mega Drive cartridges are smaller than their Master System/Mark III counterparts, with rounded edges and bigger labels layered over the top and front of the cartridge.

As with the Master System, Sega-manufactured Japanese, Korean and Asian cartridges are shaped differently to those seen in North America, South America, Europe and Oceania, however the differences largely concern the aesthetics - "Eastern" Japanese-style cartridges opting for a more rounded approach with ridges, while "Western" cartridges being more angular and simplistic. Unlike the Master System, the Mega Drive has end-labels for easier reading and storage in Western regions.

Pin layout is the same between the two types, however the base of the cartridge determines whether it can be safely inserted into the system - two extra pieces of plastic prevent Japanese cartridges from being inserted in western systems - these can be removed with modification, or as mentioned above, circumvented with adapters. This extra plastic is not present in systems such as the Genesis 3 and Sega 32X, nor does it exist in Japanese Mega Drives.

One interesting feature of Japanese cartridges is a inclusion of a cartridge "lock", which prevents the cartridge from being removed when the system turns on. A plastic piece from the system is slid across to a gap on the left hand side of a Japanese cartridge, securing it in place when the power switch is moved (similar tricks can be found on the Super NES and the TurboGrafx-16). This locking mechanism is only present in Japanese Model 1 Mega Drives and is absent in all western models - the vast majority of Western cartridges lack the gap required for cartridge locking, with exceptions being the likes of "special" cartridges, e.g. Sonic & Knuckles.

The lack of cartridge lock can be exploited, for example, to gain access to the level selection screen in Sonic 3D Blast.

Cartridge designs for Altered Beast - though labels would change dramatically over the console's run, the physical shape would remain consistent.

Though Sega manufactured the bulk of Mega Drive cartridges, a number of other alternate designs were created by companies like Electronic Arts, Sunsoft, and Codemasters, both with and without an official license to do so.

Sonic & Knuckles famously introduced so-called "lock-on" technology to the Mega Drive library, in which a second cartridge could be stacked on top to create a new game. While there were rumours of other lock-on games in development, Sonic & Knuckles is the only example which made it to market.

If a cartridge with a more than 2MB of storage is locked on to the cartridge, Blue Sphere will not load, and the setup will revert to the standard Sonic & Knuckles game. This is due to a quirk in how the game reads data from its locked-on segment - rather than reading from the first 2MB of the locked-on ROM, it will read from the last 2MB and subsequently not detect a correct header. Sonic Classics is the only exception to this rule - a compilation seemingly designed so that data from the original Sonic the Hedgehog would be detected in the right place for Blue Sphere to load.

Virtua Racing contains a custom-designed DSP chip, known officially as SVP, or Sega Virtua Processor. It allows for enhanced graphics and sound capabilities. This chip essentially serves as an extra processor, allowing the game to produce a significantly higher number of polygons than would be possible on a standard Mega Drive. It was also significantly more powerful than the Super Nintendo's Super FX chip. However, Virtua Racing released with a more expensive retail price.

The Mega Drive can only address up to 4MB of game at any one time, meaning under normal circumstances, Mega Drive games are limited to a maximum size of 4MB (or 32 megabits as was more commonly advertised). This is increased, however, using a technique known as bank switching - hardware built into the cartridge which allows "banks" of memory to be "switched" at run time. As an example, the first half of a game might be loaded into memory when the console is turned on, and when a certain condition is met, the second half is loaded in, replacing the first half (how this is achieved depends on how the game is programmed).

Bank switching in dedicated video game consoles dates back to at least the Atari 2600, however it was not implemented in Mega Drive titles until the mid-1990s, as for the most part, cartridge space was not considered an issue for developers (or at least, not enough of one to justify the extra cost implementing a bankswitching system, and for many years the Sega Mega-CD was a viable option too).