The MSX is an 8-bit home microcomputer standard announced in 1983. Led by Microsoft of Japan (now ASCII), the MSX concept was to create a standard format for computers, thus eliminating customer confusion and compatibility issues which were ripe in the early 1980s.

There are hundreds of MSX compatible machines from numerous manufacturers, sold all over the world between late 1983 and 1995 with varying degrees of success. The format was most successful in its home market of Japan, where over 5 million units were sold, but also sold well in European markets such as Spain, with its design greatly influencing the market as a whole. 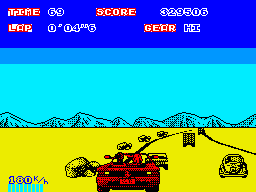 OutRun was released for both the MSX and MSX2.

Like all home computers prior the rise of IBM PC compatibles running Windows 95 (and excluding the Sega-designed SC-3000), Sega did not bring any of its games to the MSX directly, instead licensing out properties to third-party publishers (usually Pony Canyon in Japan, and the likes of U.S. Gold in Europe). However, while MSX computers were sold across the world, software was often rooted to one region, so the MSX library intended for European markets (sold on cassette) is entirely different to the intended library for Japan (sold on cartridge).

In Japan, the MSX briefly competed directly with Sega's SC-3000, and so Sega games did not appear on the rival platform until 1984/1985, when SC-3000 sales were beginning to dwindle. From a hardware perspective, the SC-3000 and MSX standard are broadly similar, meaning most MSX conversions are almost identical to their SC-3000 counterparts. By 1987, however, Sega were invested in the Sega Mark III console and were seemingly less willing to supply Pony Canyon with the rights to create more Sega conversions.

This means that while the MSX is typically thought of as a Japanese machine, MSX titles based on more advanced Sega properties were exclusive to Europe, in which, similar to other home computer platforms, MSX publishing rights were picked up by companies such as U.S. Gold and Activision (Mediagenic). Unlike many of the competing systems, however, the MSX was not considered profitable in most European countries, and so fewer ports were commercially released. Those which were were usually intended for a Spanish audience - the main MSX market in Europe, or were released some months after other systems.

As a result of the MSX failing to do particularly well in Europe, few European-developed games played to the system's strengths, with titles often being ported from the ZX Spectrum. Like the Spectrum, the MSX exhibits "colour clash", with each 8x8 background tile only supporting up to two colours, however the MSX can overcome this limitation with its built-in hardware sprites (of which the Spectrum does not have). While this usually leads to the MSX conversion having slightly better visuals, MSX optimisation was not always a priority, meaning titles can both look identical to their Spectrum counterparts, while also managing to run slower.

A small handful of games were released for the updated MSX2 specification in Japan, and Astron Belt is notable for being one of the few MSX titles to make use of LaserDisc technology.