Steven Spielberg is an American film director, producer, and screenwriter. One of the most commercially successful filmmakers of all time, Spielberg has managed and co-founded numerous companies, including DreamWorks' joint partnership with Sega, Sega GameWorks L.L.C..[1]

The GameWorks partnership notably led to him visiting Sega's research and development departments during 1996, where he oversaw early versions of Nights Into Dreams[2] and Shenmue,[3] as well as the titular entertainment chain itself, in which attractions directed by Spielberg were initially installed.[1]

References to Sega can be found in a number of his cinematic works, from Jaws[4] to the more recent Ready Player One. Popular franchises created by Spielberg have also been adapted into titles for Sega consoles and arcade hardware on numerous occasions, including Jurassic Park.

Spielberg is widely acknowledged to have became a household name thanks to his initial direction work on 1975's Jaws, based on the 1974 novel of the same name. Alongside 1977's Star Wars, it is credited with establishing usage of the long-running "blockbuster" concept, initially utilised by film production companies and now widely used to refer to any large-budget work of entertainment aimed at mass markets. Jaws is also notable in Sega's history for being one of the earliest significant popular culture works to feature and reference its produce, specifically the 1972 electro-mechanical arcade game Killer Shark.[4] The arcade cabinet is briefly used as an ironic prop in a scene that pans from an amusement arcade to a beach, mocking the film's premise and the events that surround it.

After a period more focused on drama films and a brief hiatus in the late 1980s, Spielberg returned to the blockbuster genre which he originally established with 1993's Jurassic Park, an adaptation of the titular 1990 novel. Numerous spin-off works were made under licence to promote the film, including video games. Among other companies, Sega gained the rights to both publish and develop several distinct titles for the Mega Drive, Mega CD, Game Gear, and System 32; Sega of America tested and co-produced the Mega Drive release with BlueSky Software, whereas Sega Multimedia Studio, Sega CS, and Sega AM3 handled their respective takes on the licence fully in-house. Although the games have collectively received a mixed reception and did not see any direct input from Spielberg, they are looked back on in a less negative light than the infamous fallout surrounding the Atari 2600's E.T.: the Extra-Terrestrial.

For the release of Spielberg's follow-up film The Lost World: Jurassic Park, several different video games were again released under the same name. Though developed by Appaloosa Interactive, the Mega Drive version became one of the final titles published by Sega for the console in the west; meanwhile, through Sega CS1, Sega Pinball, and AM3 once more, Sega were directly involved with its Game Gear release, pinball table, and arcade game. The latter title's popularity but lack of similarity to its source material also led to a revised attraction update, The Lost World: Jurassic Park Special. Besides officially approving for release and publishing, Sega had no further involvement with the Saturn edition, also developed by Appaloosa. Subsequent Jurassic Park films have had tie-in video games made by other developers, such as Konami's Jurassic Park III arcade release.

Under Hayao Nakayama and Tom Kalinske, Sega was generating unprecedented revenue by 1992, largely as a result of considerable success in the west with the Mega Drive and additional fortunes with its amusement operation and sales business in Japan.[5][6] Aggressive expansion of the former was spearheaded by the eventual creation of the Amusement Theme Park concept, under which Sega planned to open 100 indoor theme parks across the world[7] - the plans imitated similar moves by Namco, and were a significant part of Nakayama's hopes to rival Disney by the end of the decade, despite previous collaboration with the company at Innoventions and rumours of a business alliance. Although initial venues in Japan were successful, expansion to the United States had not made as much progress as intended by early 1995; initial talks with Universal/MCA and Disney had fell through.[8] 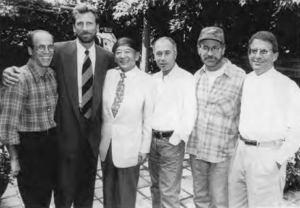 To remedy the lack of progression on their theme park business in overseas territories, Nakayama sought further business partners during 1995. In addition to initial agreements on SegaWorld London and Sydney, a compromise was made with MCA and new collaborator DreamWorks to create a chain of location-based entertainment centers based on some aspects of the original "ATP" model.[10] DreamWorks, founded in 1994 by Steven Spielberg, David Geffen, and former Disney chairman Jeffrey Katzenberg, would hold a 50% stake in the subsequent joint venture, eventually becoming known as GameWorks after its initial public announcement by the four executives and MCA personnel during September 1995.[9] The compromise led to Sega's US amusement operations expansion following trends in the North American market more closely than originally intended, containing few of the attractions seen in Joypolis venues.[11]

Following the September 1995 public announcement of their venture, Spielberg visited Sega's research and development headquarters in January 1996 alongside fellow overseas personnel and family.[12] While there, he was granted exclusive access to numerous in-progress projects, including Sonic the Fighters,[13] Nights Into Dreams,[2] and a very early Virtua Fighter RPG iteration of Shenmue.[3] Spielberg is known to have notably left marks on the development of the latter two titles; Yuji Naka recalls that after he tested a prototype of the Nights 3D Control Pad, developers internally dubbed it the "Spielberg controller",[2] and Hisashi Suzuki has claimed that his positive reception of Virtua Fighter RPG led to its acceptance among high-level executives, giving further development the greenlight partly on this basis.[3] Photos of Spielberg's visit were subsequently published in Sega's company newsletter, Harmony.

The full extent and intents of Sega GameWorks L.L.C., additionally a new distribution arm for North America alongside a chain of venues, were unveiled by Sega during March 1996,[1][11] with Spielberg assuming control of development on the design of the first centers and a number of new attractions exclusive to them.[1][14] The first full-scale venue in Seattle, Washington, opened the following year on March 15.[15] Spielberg had hoped to attend its opening day event broadcast live on MTV, but was ultimately unable due to production commitments, instead appearing in pre-recorded interview segments for the aforementioned MTV special.[16] Although a further 17 GameWorks locations opened in the following years and purportedly drew in an estimated 15 million footfall at their height, the chain was not as successful as planned; Spielberg officially pulled out of any remaining involvement when DreamWorks withdrew its 50% stake in 2001.[17][18]