Tetsuya Mizuguchi (水口 哲也) is a Japanese businessman and former Sega of Japan designer, producer, and executive. One of the most well-known developers to have passed through Sega's ranks, he has been primarily responsible for several of the company's biggest arcade and console successes, including Sega Rally Championship, Manx TT Super Bike, Space Channel 5, and Rez.

Since leaving Sega in 2003, Mizuguchi has continued to lead a successful career, co-founding Q Entertainment with other former colleagues and later Enhance Inc. by himself.

Tetsuya Mizuguchi was born in Sapporo, Hokkaido in 1965.[2] Studying aesthetics at Nihon University's Faculty of Arts during the 1980s out of his aim to create forward-looking media, Mizuguchi originally endeavoured to become a music video director; however, as the decade came to a close, he started to perceive the then-nascent video games as the best form for this goal, having already been formatively fascinated by Pong as an 11-year old, Xevious in college, and Xenon 2: Megablast at university.[3][4] Inspired by an encounter with the company's advanced R360 simulator during 1990, the future developer's prime choice for work in this field was Sega.[3][5][6][7] In spite of his lack of experience with the industry and a turbulent job interview with Hisashi Suzuki (in which he mistakenly cited his fondness for Namco's slogan, "We Create Play", as a reason for his application), Mizuguchi was ultimately accepted into Sega off the back of his 40-page treatment he had prepared, forecasting trends in technology, art, and entertainment.[8] 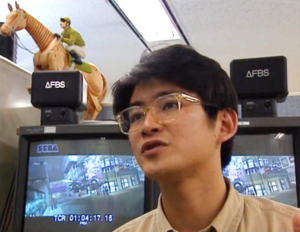 In keeping with his previous studies, Mizuguchi was first given an aesthetic research role.[10][11] Taking advantage of this position, Mizuguchi convinced executives to let him attend a virtual reality conference in Austin, Texas - the conference fuelled his desire to utilise the burgeoning technology, already sparked by previous interest in NASA's use of it.[12] Initially involved in tests of an unreleased augmented reality Game Gear prototype[6] and talks with Virtuality,[3] his enthusiasm for the concept saw him assigned to AM3, where he successfully persuaded management to order expensive 3DCG equipment.[10] The department became the first within Sega to produce pre-rendered CGI material, including ride films for AM5's AS-1 motion simulator.[13]

His first ever released project for Sega, Megalopolis: Tokyo City Battle, was one of the most significant of these ride films.[14] Co-directed with film maker Michael Arias,[10] it saw Mizuguchi gain valuable experience in leading a team, as well as a taste of worldwide recognition through its inclusion in SIGGRAPH 93.[15] Throughout this time, Mizuguchi was part of a small 3DCG development department he had established within AM3 named "Emotion Design Lab",[16] under which he instructed company newcomer Mie Kumagai to create her first two projects, an entrance film for the opening of Yokohama Joypolis and ride film for the Kome Kome-Music Ride showcased at Live UFO '94, following a successful job interview with him.[17][1]

Influenced by an evening watching rally racing and his subsequent interest in the sport, Mizuguchi's next project, Sega Rally Championship, took advantage of the new Model 2 hardware's real-time 3D capabilities and established himself proper in video game development. More visible than Megalopolis, which was limited to select facilities with the AS-1, the 1994 arcade release and subsequent 1995 Saturn port of Sega Rally propelled his career to new heights, leading to involvement with the similar Manx TT Super Bike after a trip to the Isle of Man.[18] With two hit arcade games now under his belt, Mizuguchi had risen in Sega's ranks, and in 1996 was granted permission to leave AM3 and lead a new division, AM Annex.[11] Further arcade racers came with follow-ups Sega Touring Car Championship and Sega Rally 2.[19] Mizuguchi also collaborated with AM5 again for the Sega Rally Special Stage and Sega Touring Car Championship Special attractions.[7][20] 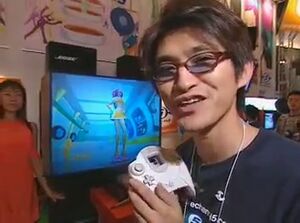 Having completed work on his final arcade project, Star Wars Trilogy Arcade, Mizuguchi was primed to become a key part of Sega's strategy in providing the Dreamcast console with innovative new concepts that could still appeal to more casual audiences.[21][22][23] Heading the new Sega Software R&D Dept. 9, he had a renewed interest in how music, sounds, and colours could play a part in video games after his participation in several European festivals and raves during the 1990s.[24] Space Channel 5 was Mizuguchi's first work borne out of this, itself a significant title in the first wave of rhythm games and highly popular among critics.[25][26]

Following its success, his division was given further prominence as a company and renamed United Game Artists in the April 2000 restructure - as the Chief Creative Officer and president, Mizuguchi then worked towards developing his most ambitious title yet, Rez, another by-product of his continued interest in creating total sensory experiences. Selling poorly amidst Sega's termination of Dreamcast support and a simultaneous PlayStation 2 release, the game was nonetheless met with widespread critical acclaim, securing numerous awards in the subsequent months and becoming regarded as a cult classic across the world.[27][28][29]

Although highly consequential to their support of what was once a vital area within the company, the collapse of Sega's console business in 2001 did not deter Mizuguchi and UGA's efforts in continuing to produce innovative, forward-looking works. In addition to spin-offs on multiple consoles and handhelds, including direct continuation Space Channel 5: Part 2, the Space Channel franchise notably received considerable recognition in Japan through UGA's extensive adoption of early mobile gaming technology;[2] for a time, main series character Ulala was effectively the mascot of Java applet-enabled J-Phone handsets.[30] Under the the tie-up's Ulala no Channel J content portal, all sets came pre-packaged with Tsuwa Shichouritsu, one of the most graphically advanced pieces of mobile phone software up to that point in time and starring a real-time 3D model of Ulala.[31] An estimated 8 million phones were sold with it installed.[32] 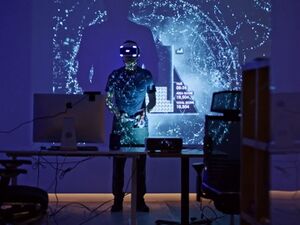 Despite the critical success of numerous titles, some of which headed by Mizuguchi, Sega was still in financial turmoil even after extensive restructuring and the loss of the Dreamcast. Directionless merger discussions with the likes of Namco and Sammy had eventually resulted in the latter obtaining the 22% of shares formerly held by CSK in the company,[33] ultimately becoming its largest shareholder in August 2003. Company-wide reorganization of staff and subsidiary companies had been planned in advance, and one of several teams to be closed by this was United Game Artists. All of its developers were subsequently transferred to Sonic Team.[34]

The move meant that Mizuguchi was demoted from his head position, with Sammy dictating a shift in focus from development of loss-making global console titles to Sega's then-profitable arcade games in Japan. One month on from this, Mizuguchi announced his retirement from Sega whilst guesting on the October 7 edition of the Tokyo Game Lounge webcast radio programme, effective from October 10.[35] He has since retrospectively cited negative changes in the company's corporate culture following Sammy's buyout of shares as a direct influence on this departure,[36] as well as wider atmosphere shifts in the maturing 2000s gaming industry.[37]

With a number of other former United Game Artists personnel following him, Mizuguchi decided to move forward by pursuing a largely independent career in the industry, allowing him a greater degree of freedom. Alongside these former colleagues, he co-founded Q Entertainment in 2004, running the company, developing numerous other music games, and experimenting with other offshoot projects. After previous hints of a collaboration with Sega and spiritual successors to the title, Mizuguchi has returned to his final large-scale product for the company by remaking Rez, first through Q Entertainment in 2008, again in 2016 under new self-founded start-up Enhance Inc, and once more the following year for PC, each in a higher definition than before. Its most recent incarnation has added virtual reality functionality; alongside his work on Tetris Effect, these have enabled Mizuguchi to finally achieve his initial VR aims formed at Sega.

Tetsuya Mizuguchi is widely regarded as one of the most talented visionaries in video games. Mizuguchi's works, particularly the examples made at Sega, are often cited as a significant influence on numerous developers in the gaming industry. Former Codemasters producers have claimed that Sega Rally Championship was a key inspiration in the creation of the first Colin McRae Rally game;[38] similarly, Alex Rigopulos, co-founder of Harmonix Music Systems, has credited his contributions to the music game genre as one of the driving forces behind Harmonix's output.[39] Of these, Rez in particular has endured as a highly respected work among critics in spite of initial low sales; since release, it has received numerous accolades, and continues to inspire developers and designers alike.[40] In the wake of this success Mizuguchi has revisited the title for spiritual successors (Child of Eden) and remasters (Rez Infinite). He has been invited to reflect on his career at Sega for conferences and documentaries by the likes of Academy of Interactive Arts & Sciences and CNA.