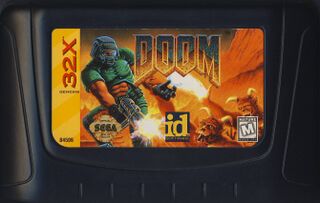 Sega 32X cartridges are the primary storage medium for the Sega 32X.

By design, the Sega 32X can accept any standard Sega Mega Drive cartridge, however in addition to this it can run 32X software housed on a different type of cartridge. While the dimensions are similar, the shape differs with the 32X and (labels aside) the design is consistent across all regions. Unlike the Japanese Mega Drive there is no cartridge lock, but there are also no end labels.

Similarly to the Mega Drive, Sega chose to implement region encoding in 32X cartridges at a software level, meaning it was up to developers and publishers to decide whether to implement the feature. However, as few publishers supported the 32X, the majority of games were published by Sega and therefore usually have some form of region locking enabled.

With only a small handful of region-exclusive 32X games, there was never enough demand for 32X region converters. Most, if not all, PAL 32X games are partially optimised - while gameplay is often slower than their NTSC counterparts, the music has almost always been corrected and some games such as Chaotix take advantage of the larger screen resolution.